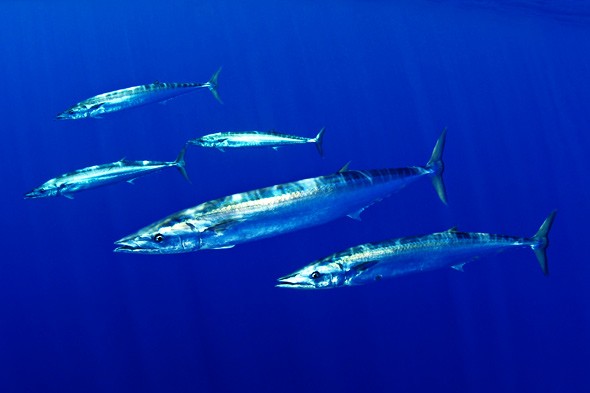 over the world. It is one of the most sought after game fishes due its incredible speed, aggressive fights, and excellent meat quality. Catching wahoo is quite a challenge to sport fishermen and anglers which makes the fish a very popular trophy species. In Costa Rica, wahoo is served a delicacy in expensive restaurants. Whether you are a seasoned angler or a novice traveler on a fishing cruise, do try your luck in the Costa Rican waters and you won’t be disappointed. Hard to catch and rare to come across, landing upon a wahoo turns out to be a pleasant surprise.

Wahoo has an oblong body entirely covered with tiny scales which are hardly visible. Its body features a lustrous blue back, silver sides and blue vertical bars with a set of sharp teeth. The rainbow like color fades away quickly when the death is near. Wahoo has a large mouth with a somewhat sharper set of jaws as compared to king and Spanish mackerels. Another distinguishing feature is the mandible. The mandible of king mackerel is covered by a fold of skin when the mouth is closed unlike in wahoo. Wahoo is also very similar to barracuda. However, unlike wahoo, barracuda has larger and prominent scales. In length, wahoo up to 8 feet 2 inches tall have been seen! They can weight about 83 kilograms! Wahoo is the few of the fastest swimmers in the oceanic world. They swim at the speed of 60 mph! 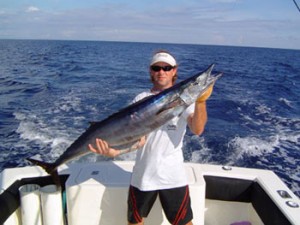 bite large bits out of bigger species. They are sub hunters which means they wait below the surface zone and then ambush their prey with speed and power. They actively hunt during mornings and evenings.

Wahoo are usually found nearby the reefs, pinnacles, wrecks and rock formations. You may also find them offshore roaming in the deep azure water. They are loners and like to live alone or in small packs of two to three wahoos.

Wahoo – Where and When to Find in Costa Rica

Wahoos are present ocean wide. Atlantic Ocean, Pacific Ocean and Indian Ocean have tropical and subtropical areas where thousands of wahoos dwell. In Costa Rica, a plethora of wahoos are found on the Pacific coast especially in summers. Although they are present in the coastal waters throughout the year, January to April and the green season from May to September are considered as the peak time to catch wahoo. They may be caught inshore in the reefs or offshore while hunting. They are seen on both the Pacific and Caribbean Coasts.