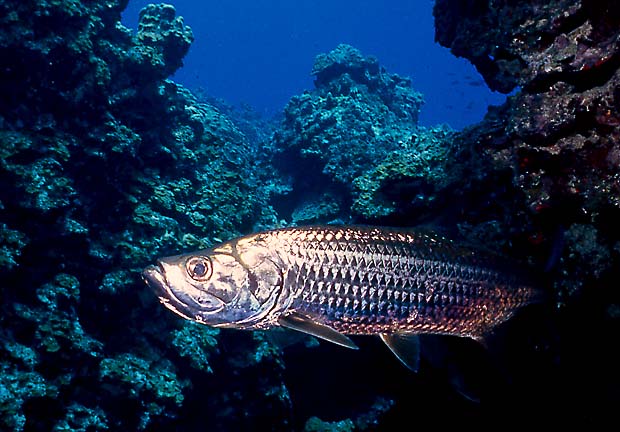 Tarpons are large fish species that belongs to the genus Megalops and the family Megalopidae. Tarpons are found in warm, shallow tropical waters of Indo-Pacific Ocean and Atlantic Ocean. Tarpons are considered to be a fabulous sport fishing catch. They are admired among sport fishermen as they present a great challenge due to their impressive size, amazing acrobatic moves and long fights that can exhaust even professionals. As they are inedible, they are usually released after they are hooked. In Costa Rica, numerous sportfishing tournaments are held to catch tarpons. The fish is said to be around since prehistoric times and Costa Rica is one of the few countries to have them. On your fishing expedition in Costa Rican marine water, you may get lucky and land upon a tarpon.

Tarpons have blue or green dorsal and anal fins with characteristic lateral stripes and lustrous sliver scales over the entire body except the head. Their eyes are large with adipose eyelids, broad mandible (lower jaw) that extends outward. Tarpons can reach over the length of 5 to 8 feet and weigh up to 80 to 280 pounds. They are late growers and it takes them 7 to 13 years to mature. During the breeding season, a female tarpon can lay more than 12 millions of eggs! Tarpons have a distinctive feature called a swim bladder. The purpose of a swim bladder is like a respiratory organ which allows tarpons to breathe above the surface. However, this ‘air breathing’ is essential for tarpons because if they don’t, they die. This is why tarpons are often sighted leaping above the water surface.

Juvenile tarpons don’t eat; instead they absorb nutrients from the marine water. As they grow, they begin to feed on zooplanktons, insects, small fish and eventually crabs, grass shrimps and larger species. Mature tarpons are purely carnivorous and hunt during the night time. Depending upon their size, tarpons can be captured by zooplanktons, sea birds, crocodiles, sharks and porpoises.

Tarpons are found in Indo-Pacific region and Atlantic coast of Virginia, Brazil to the Gulf of Mexico and to the Caribbean region. They 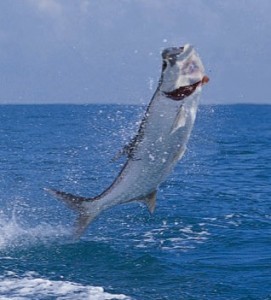 flourish in both salt and fresh water and thus it is common to find a tarpon in rivers, brackish water, marshes, tidal pools and creeks. Juveniles prefer shallow, muddy waters while adults like to reside in the ocean. It is seen both inshore and offshore waters.

Tarpons – Where and When to Find in Costa Rica

Tarpons are seen everywhere along the Caribbean and Pacific coasts of Costa Rica in marine as well as fresh water like rivers, marshes, creeks and lagoon. Even though they are found in numerous places, the best areas to fish for tarpon are in northeastern coast of the Caribbean and Cano Negro Reserve. Tarpons don’t like to migrate here and there. They can be easily caught throughout the year. However, depending upon the weather and marine conditions, the preferable months are from late January to early June and from September to early November. Rests of the months are too rainy to support a good fishing expedition for tarpons.