The yellowfin tuna (Thunnus albacares) is a type of marine tuna fish found in tropical and subtropical areas all over the world. Costa Rica is a tropical country famous for its pristine beaches, verdurous jungles and superb tourist destinations. One of the many things that make Costa Rica popular is its aquatic sports opportunities. Visitors have a chance to try out surfing to brave the challenging waves, scuba diving and snorkeling, sailing, kayaking and sportfishing. Costa Rica is a worldwide famous spot for sportfishing.

There are hundreds of different species of game fish waiting to be caught. One of the trophy game fishes is a yellowfin tuna. Often called as ‘the ball of muscle’, yellowfin tuna is a strong fish which put up an amazing fight once it is hooked. The acrobatic jumps, runs and its constant striving can even make any professional fishermen give up! With its super fighting abilities and patience, yellowfin tuna provides a great challenge to anglers and fishermen. Once caught, it also makes quite a delicious meal! On your Costa Rican retreat, venture out to the sea and fish for yellowfin tuna! 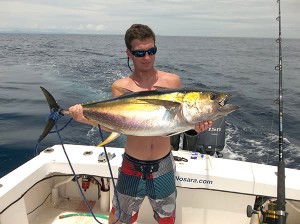 >flying fishes, and young fishes. Tuna species is known for its awesome speed. Just like all other tunas, yellowfin tuna can easily capture their victim with a rapid speed. Larger yellowfin often prey on smaller tuna members like skip-jack, frigate mackerel and so on. Yellowfin tuna themselves fall victim to larger tuna, seabirds, wahoo, sharks, billfish and marlins. As yellowfin are fantastic swimmers, they are able to escape death most of the time.

Yellowfin tuna are epipelagic species which means they dwell in the sunlit or euphotic zone, the top layer of the ocean zones. They are found mostly at the depth of 100 meters. Yellowfin tunas are not loners and prefer to live in large groups.

Yellowfin Tuna – Where and When to Find in Costa Rica

In Costa Rica, the yellowfin tuna is found in the Pacific Ocean and Caribbean Sea. Places like Quepos, Manuel Antonio, Drake Bay, Osa Peninsula, Nicoya Peninsula, Tamarindo and numerous more are flourishing with the species. Although large schools of yellowfin tuna are seen throughout the year, the best months are during the green and peak seasons, from May to October and June to August respectively.