Mahi mahi have neon green, bluish and golden colored body which light up when they are hooked. They are rapid breeders and have a very short life span of about five years. They weigh up to 80 pounds. Males have a high and flat forehead and are easily distinguishable from females. When mahi mahi are young, they travel in large packs but as they grow mature, they tend to live in pairs or alone. Mahi mahi are quite strong and posses incredible speed! They can swim as fast as 92.6 km per hour! Have an adventurous time trying to catch them!

Dorado are carnivorous fish and mainly prey on smaller species such as squids, flying fish, mackerel, and crabs, forage fish, 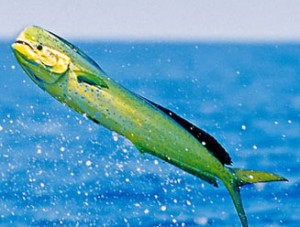 crustaceans and even zooplanktons. They are among the fishes which grow up rapidly. Doardo ambush their victim and are known to attack from the sides.

Mahi mahi breeds in warm tides throughout the year. The younger mahi mahi live in the sea weed while adult mahi mahi dwell in current lines, garbage flows, floating trees and almost anything which could provide a good cover. In Costa Rica, they can be easily found offshore.

Mahi Mahi – Where and When to Find in Costa Rica

The stunning dolphin fish, mahi mahi, is found everywhere along the Pacific and Caribbean coasts of Costa Rica. Fishermen will commonly find the brilliant fish in offshore waters but they are also seen nearby the reefs, wrecks, isles, pinnacles, and wreck in the coastal waters while they are hunting for food. Typically, mahi mahi can be caught throughout the year. However, they are found in large numbers when they have billfish on their tales. During the green season, which is from May to August, 40 to 50 mahi mahi can be caught!