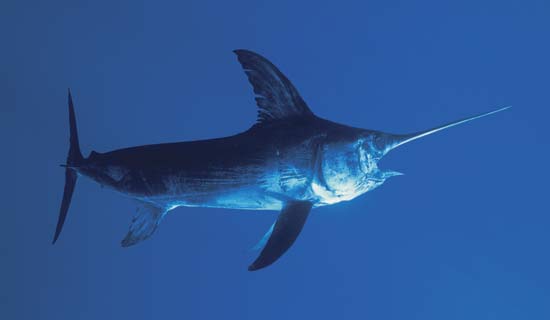 Swordfish, or broadbill, is a huge, predacious fish recognized by its long, flat bill. Swordfish is a highly prized game fish that belongs to the family Xiphiidae. They are often categorized with the billfish. The elusory sport fish is quite hard to find and catch and it is a pleasant surprise to land on them. Swordfish are found in tropical and temperate areas of Pacific, Indian and Atlantic Oceans from the surface to the depth of 550 meters. Costa Rica is a tropical country that has gained tremendous popularity in the last few years. Along with incredible aquatic sport opportunities, it offers numerous fishing grounds to tourists and anglers. To the delight of sportfishing enthusiasts, various towns hold fishing tournaments now and then. There are plenty of swordfish residing in the warm, sultry water of Costa Rica and on your lucky day, you may catch a few of those!

The name swordfish is derived from the fish’s elusive bill that resembles a sword. The bill not only helps them in swimming but also is very handy in capturing the prey. The swordfish can typically reach over the length of 3 meters and can weigh about 650 kg. Their life span is at least 9 years and they reach maturity around the age of 4 to 5 years. Female swordfishes are larger than the male ones. Swordfish are ectothermic species and they have the ability to conserve heat like marlins, sharks and some tuna.

Swordfish are elusive predators. They are nocturnal hunters and feed everyday. During the night time, they swim up to the surface waters and prey on small fish. Adults mostly feed on pelagic fish like mackerel, barracudas, silver hake, rockfish, herring, lantern fish, demersal fish, scombrids, butterfish, bluefish, and sand lance as well as on squids and crustaceans. They slash and injure the larger fish with their sword like bill while they swallow the smaller fish as a whole. In turn, swordfish is attacked by killer whales, sharks, and other marine mammals. Swordfish are often infected with parasites like tapeworms, roundworms, copepods, remora or lampreys. They try to get rid of them by breaching and basking at the surface.

Swordfish like to live in the water temperature ranging from 18 to 22 centigrade. They prefer to live alone or in small groups rather 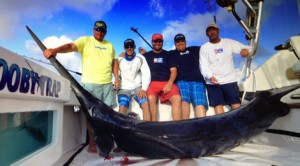 than living in large packs.

Swordfish – Where and When to Find in Costa Rica

Popular swordfish sportfishing spots in Costa Rica are Drake Bay and Golfito in the southern side, Quepos and Manuel Antonio in the Central Pacific Region, Guanamar, Flamingo in the north, Tamarindo, Osa Peninsula, Golfo Dulce and many other places along the Pacific coast. There are many charters that arrange night fishing trips when swordfish are actively hunting for food. They can be found throughout the year.