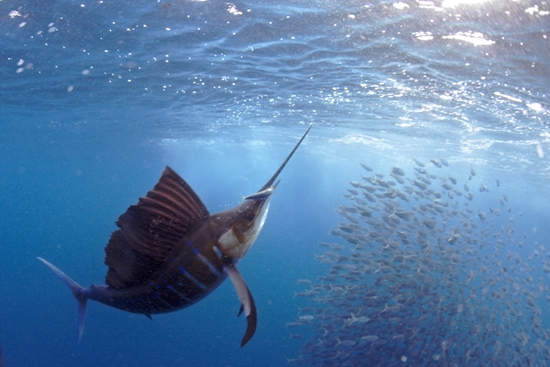 is known for its awesome acrobatic moves and amazing speed. It is no doubt that the sailfish is one of the most popular game fishes in Costa Rica.
Even when you have hooked the fish, it will intimidate you with its strong sporty moves while you try to maintain your balance and force on the line. The fish is found in abundance all over the country but it is considered a trophy fish as it is quite to difficult to catch. When you have caught one, you will have a worthy tale to tell!

The pacific sailfish is common in the Pacific Ocean. It has a dark blue and brown body with a silver belly. Its distinguishing feature is a spear shaped snout and a sail like dorsal fin with black cones. They use the sharp speared bill to hunt the prey. Adult sailfish typically reach over 7-10 feet in length while young sailfish tend to grow very rapidly gaining the length of 4 to 5 feet in just one year. Sailfish mostly weigh between 60 to 100 pounds. The sailfish is an extremely fast fish with the top speed of 109 kilometer an hour!

Dietary Habits of a Pacific Sailfish

Due to their high speed and a spear for a snout, they have no trouble preying. They prefer to feed upon squids, smaller pelagic fishes like mahi mahi, tuna and mackerels.

The Pacific Sailfish – Where and When to Find in Costa Rica

Sailfish love the warm, tropical salt water. In Costa Rica, they are a common species on the Pacific coast but it is not rare to find some 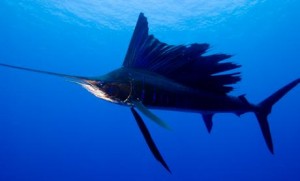 on the Caribbean side. They are mostly found in the deeper areas either alone or in small groups. Even though they are found throughout the year, the months from November to April are best to catch sailfishes in Southern and Central Pacific areas of the country. In Guanacaste province, May to November is a perfect period. The dry season, from August to October, brings numerous pacific sailfish in the Caribbean.

The Pacific Sailfish in Costa Rica